skip to main | skip to sidebar

Dedicated to the whirling free woman who spun a string of words that inspired me and helped be out of my dumbed down stupor. 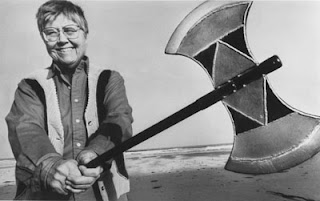 Mary Daly and her labrys


As Wanderlusty/Wonderlusty women weave our way Weirdward into the Realms of Pure Lust we find we must fight off the Fixers/Tricksters, those poisonous presences whose program is to freeze/frustrate our Movement. These are the sovereigns of the sadostate, which can also be called the State of Boredom. For it is infinitely boring to be blocked from the movement of/toward one’s innately ordained happiness.[…]

The compulsion to bore everywhere bores Lusty women. The institutions of Boredom - its media, its schools, its industries, its amusements, its religion, its governments, its culture - are programmed to control Viragos, to keep us within the confines of bore-ocracy, using bore-ocratic details and mazes. Weird women snore at the brothers’ Bored Meetings, seeing through the lecherous leaders as Chairmen of the Bored. […]

Given these conditions of Stag-Nation, Elemental Shrews and Furies urgently experience the need for Re-Naming/Re-Claiming our stolen Flames, undoing the promethean theft of Fire, retrieving our ravaged desire.

The would-be preventers of this retrieval of gynergy, the ghosts/ghouls that want our movement dead, are snools. The noun snool (Scottish) means “a cringing person”. It means also “a tame, abject, or mean-spirited person” (OED). In sadosociety, snools rule, and snools are the rule. The dual personalities of these personae - the cast of characters governing and legitimizing bore-ocracy - are unmasked by definitions of the verb snool. This means, on the one hand, “to reduce to submission: COW, BULLY,” and on the other hand, “CRINGE, COWER.” Snools are sadism and masochism combined, the stereotypic saints and heroes of the sadostate.

Snools appear and re-appear in various forms. […] Among the henchmen required for the smooth operation of fixocracy are the cocks, danglers, pricks, and flashers who keep girls and women intimidated. Necessary also are the fakes, framers, frauds and hucksters whose job is to manufacture and spread delusions. Heavier work is assumed by rakes, hacks, rippers and plug-uglies. Plug-uglies are among the grosser snoolish incarnations. Plug-ugly is defined as “a member of a gang of disorderly ruffians often active in political pressure and intimidation.” […] Plug-uglies, while creating the illusion that they are always giving something, are in fact drainers of energy whose plugged-in fittings close women’s circuits, sapping the flow of gynergetic currents so that these cannot circulate within/among women.

Such, then, are the rulers/snoolers of snooldom, the place/time where the air is filled with the crowing of cocks, the joking of jocks, the droning of clones, the sniveling of snookers and snudges, the noisy parades and processions of prickers. Such is cockocracy/jockocracy, the State of supranational, supernatural erections. This is a world made to the image of its makers, a chip off the old blocks/cocks, who are worshipped by the fraternal faithless as god the flasher, god the stud, and god the wholly hoax.

Wayward, wanton women, having been warned of the snoolish snares, proceed forthwith on our Wonderlusting/Wisdomweaving Quest.
Posted by Peggy Carter at 6:18 PM No comments: